On my recent trip home to Ohio, I had a chance to go through some old photos… not sure that was such a good idea.

One time when I was 19 I decided I had eaten enough to last me a while so I stopped. I ate very little, mostly popcorn and Buddig lunch meat, for the next 3 years.

I got skinny, and I got boyfriends, both of which I had never had before. Unless you count the life size poster of Shawn Cassidy I had on my bedroom wall that I kissed nightly before bed. Or you the count the boy I went to the prom with, who was totally my boyfriend in my head but his girlfriend, who was also my girlfriend disagreed.

And no, she was not my girlfriend like she was his girlfriend. I did not even know about that kind of stuff yet, which may have been part of the reason why I did not have a boyfriend.

What I am trying to get to is, that while I looked pretty smoking hot, I was weak from hunger and not as cognitively correct as usual, hence some of my choices when it came to picking boyfriends. Hell, I did not even know yet there would be choices when I picked this one.

The guy wasn’t all bad; he did take me to Key West and buy us matching tee shirts. We were just not a match so I broke up with him. I was so proud of myself for doing it, but as soon as I found out he had another girlfriend, of course I wanted him back.

Thank Gawd he didn’t take me back! What if we had gotten married, god forbid, and then he might never have left Ohio and gone on to star in Reno 911.

At least I think that’s what he did after we broke up. 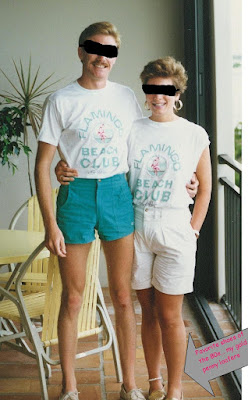 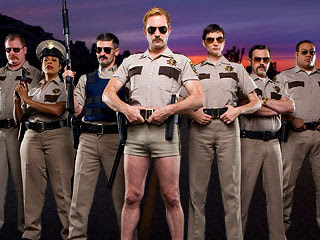 On the Season Premiere of RENO 911! April 1 at 10:30p/9:30c Did the Reno Deputies survive their horrible taco stand accident? Find out what happened

I am so proud to know you. I can't believe you dated someone famous!

Dear Wendy......
Those days seem far away .....but I remember your Miami Vice days and that pic with the bubbles! You rocked!
an OLD friend
k