Spurred on by her anniversary, a mere 16 weeks in the future, and the expensive (especially considering the lack of material involved) dress she already bought, a woman with an under muscled, overly cushioned keister pushes her way to the heavy weights side of the YMCA. Passing the retired marines, the off duty cops and the high school boys with more brawn than brain she declares, “Pardon me girls, I’ve got some work to do!”

She determinedly lowers herself onto the leg press, the theme from Rocky pounding in her head, and she wonders if she should have drank her eggs raw instead of making them into that delicious omelet.

She pushes; muscles flex, varicose veins bulge and she grunts under the strain of the ten pound weight, (that’s’ five on each side) “One! One leg press, ah ah ah.” she proclaims aloud with pride.

“You sound like the count from Sesame Street,” the boy next to her smirks, then slides another hundred pounds on his machine. (That’s a hundred on each side.)

She presses on, “Be quiet boy or you’re going to meet the Grouch!” She strains, “Two?” She sweats and pushes, “Two legs press, ouch , ouch, ouch!”

“Do you need some help up lady?” the bicep burdened mocker inquires.

He moves, nay, all but skips to the next machine. The woman waits until he is gone before she pulls her abundant panties free from what seems like a 127 hour entrapment in her gluteus cavernous maximus. She rubs her legs as a smile creeps over her face.

“Two, two leg presses ah ah ah. That’s one more that I did yesterday!”
No comments: 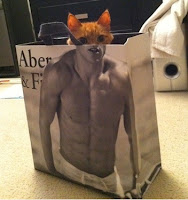 Ladies, you are never going to get a man that looks like this if you have cats, because guys think you're crazy. Wayne has a friend that has a theory regarding women and cats, and I have relatives that prove it.
It states: three is the tipping number. His crazy meter shows that anything over three cats is a short jump to thirteen. Three cats and she might still be OK, but once she gets the fourth one it's on. Cats on the kitchen counters, crocheted kitty boots and gourmet cat food is the next stop on the cat town express, final destination cuckoo-ville.
Quick aside: Have you noticed that some of the gourmet cat food looks better than some of the Chinese food from the joint on any city corner, that is probably made out of cats? Just a thought.


Now, below is another bit of evidence on the cat crazies. When I see a hot guy with a sixer, (which I would never notice unless Wayne had never been born, see previous post on that matter here) this is not the kind of pussy I'd want to see him holding.
Hot Dudes with Kittens from Sam Trammell
No comments:

I Have Been Kevin

Friday night with the gang from work.

Anywhere I have ever worked I have been forced to suffer a Pep Talk. God help me I hate the talk. If you want to suck the life out of my soul with a deliberate, incredibly agonizing mélange of nauseatingly inspirational adjectives, give me a Pep Talk.

Follows is an example of the kind of Pep Talk that works best for me. “Get your shit together asshole; now get out of my office.”

However, my team was given a little rah-rah session the other day that I actually found amusing. It was chalk full of tips and reminders on how to deal with our customers when they call in regarding their phone or internet service.

We were reminded to give clear and concise instructions when trouble shooting a problem for the frustrated customer on the other end of the line. “Make sure they understand to dial *69 and not S.T.A.R. 69. Also if they can’t find the pound key maybe you just need to tell them to mash the tic tac toe button.” Good advice really.

But we were also warned how our behaviors might negatively affect our performance rating. “Should you be talking on your phone when you’re supposed to be talking on our phones? O.H.N. Oh heck no! And when I catch you, which I will, don’t start telling me you’re talking to your grandma on her death bed or that you just found your long lost twin. Man up, say you’re sorry and get back to work… Now get out of my office.”