Does This Car Make My Butt Look Big

Last week was busy and interesting. My mom is still visiting from Ohio and I am volunteering at SAK Comedy Lab at least once a week. I love it there. It is so fun to be around creative, funny, young, people. Last week another event was happening simultaneously to the SAK show, right outside the window. 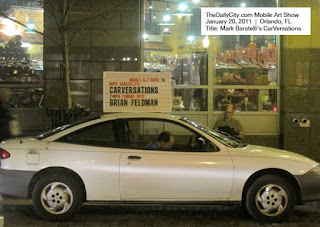 During the 3rd Thursday Gallery Crawl, Mark Baratelli of The Daily City, Orlando Weekly’s Blog of the year in 2010, created and hosted CarVersations. For the meager donation of $1 one could get in a car with renowned performance artist Brian Feldman and talk. For 5 minutes you had his full attention and were free to talk about anything you wanted… or not.
The mouthwash was provided, I thought I was ok, but I cracked the window just in case. I decided to talk about me because that is the one subject I am truly articulate in. I asked for advice and he gave it. The last time I paid someone to listen to me and then asked it advice, it cost a lot more that $1 and they were wrong anyway.
CarVersations is a great idea, and I can’t wait to see who I can get in the car with next month. Suggestion to Mark: Get a station wagon, the Caviler made me look fat.
No comments:

He is a dirty boy. Don’t believe me? Well here’s an example, “I can smell the butt hole, I just can’t see the butt hole.”

That’s probably my favorite. In fact, I think that says it all. Yet even with all that filthy, dirty, smelly, talk, I can't help but find him adorable, even when he’s covered in blood, puke and poo.

It’s phraseology like that little maxim above that keeps me coming back every Tuesday whether I need it or not. It speaks to his tenacity really. Most men would give up when they smelled the butt hole but not him, oh no not him; he kept looking until he found it.

This week he played the role of a snake wrangler, other weeks he has taken on the duties of a sewer inspector and even a marble roller.

If you’re at all familiar the show Dirty Jobs with Mike Rowe then you know he has worked many many jobs over the years and been subjected to more kinds of fluids, of all types, than you ever thought existed.

In the episode where he coined the phrase, “I can smell the butt hole, I just can't see the butt hole.” he was working with a snake conservationist capturing, tagging, measuring and sexing endangered snakes before releasing them back into Lake Erie.

And everybody knows there’s only one way to sex a snake. You got to find the butt hole and then… well, you get the idea.

Here’s a little clip from the show. Enjoy!

The holidaze are over, the tree is in the attic and the balls are boxed. Yet the remains of the ham, make that hams, engorge the fridge.

Funny how we celebrate the birth of such a nice Jewish man with ham, ham and more ham.

It was the Christmas of the five hams, Palm Ridge Whiskey, a ginger bread house, RELATIVES and Bacardi & V8.

Here’s the thing; I was pickled enough on the Palm Ridge that I did not want to drink more of it when I wouldn’t really appreciate it, but I was not quite lubed enough to make it through the rest of the hamlibration relative fest, so I improvised. The eggnog was gone so, it was mix the Bacardi with V8 or some of our cat piss coffee. A toss up.

I considered mixing up some Metamucil and spiking that with a shot, you know just to make sure I didn’t get stuck with any of that ham for more than a day or so, but that seemed a little too much like an ex-cougar who’s been looking at 39 in the rear view mirror for a long droopy time. V8 it is!

“Yes mom I know which end of the vacuum sucks, I just missed a spot.”

“Mom in-law, please come out of the kitchen… No, I will do the dishes tomorrow morning. Yes I was going to let them sit all night.”

Is it wrong to drink alone in the garage on Christmas day?

But I do try to appreciate having family around; time moves quickly these days and we should spend it with our loved ones as often as possible. Even if that means I have to start spiking the Geritol. Should I put celery in that or a thermometer?

Alas, the holidays! Five hams; ours, the in-laws, the brother’s, the office party’s, and some that was left in our mailbox by our neighbor, 5 pounds and five golden rings.

It used to be telephone rings, then cells and now Skype. In an effort to stay modern and not become stifled in outdated holiday traditions I am moving past the drinking and dialing phase and into a drinking and Skyping phase.

Not a good idea, unless you restrict your calls to girl friends whose nick-names begin with Crazy, or in some cases, Krazy.

8PM: “Merry Christmas girl, how are you do- are you naked? Gross, you know I can see that right?”

9:45PM “That’s right, she said your gift was an insult, it was kinda shitty… Hey don’t disconnect, I want you to look at my mole.”

Next year we are going to quietly leave town on December 20th and not return until all the hams have been eaten.
No comments: