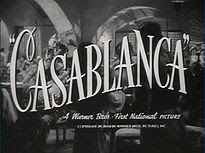 It goes without saying that Wendy and I are film buffs. Yet strangely enough, we had been a couple for nearly three years before we watched Casablanca together. There is more to the story, but we'll get to that in a moment.

The day before Thanksgiving; November 26th, was the 66th anniversary of the premiere of Casablanca at the Hollywood Theater in New York City. The opening is rumored to have been timed to coincide with the Allied invasion of North Africa and the capture of Casablanca. General release didn't happen until January 23rd of 1943.

Casablanca was well received and had substantial box office success, but critics were less impressed. Variety considered it "anti-Axis propaganda", while the New Yorker called it "tolerable". It was the seventh best selling film of 1943 and has grown in popularity over the years, mainly due to continued theater screenings and fairly consistent rebroadcast on television. Although the WGA West in 2006 voted Casablanca as the best all time screenplay in it's list of the 101 Greatest Screenplays, in recent history, writer Chuck Ross claims to have submitted the screenplay with an altered title to 217 agencies with only three rating it as commercially viable. As the saying goes, no one knows anything!

Wendy and I started dating back in 2002 and we often spent the evenings with a DVD and my cooking. We had discussed film quite a bit and Quentin Tarantino came up in conversation on multiple occasions. I suggested Reservoir Dogs and Wendy pretended she wanted to see it. As I remember, we killed two bottles of wine, fell asleep on my room-mates sofa and never saw the end of the film. I like to think that Wendy just wanted to sleep with me.

Anyway, when our discussions turned to our all-time favorites list, I came up with Casablanca. However, I had seen bits and pieces of the film over the years, but had never sat through a complete screening. When I implied that I would get that one for us as our next date movie, Wendy emphatically stopped me, "No! I've never seen Casablanca, but I'm saving that one for the man I marry"! So, knowing that I was never going to get married again, that one was off the table for us.

Flash forward to December 24, 2005: My brother's house in Florida for Christmas Eve. My parents are there, my sister and her husband, their three daughters, my brother and his wife along with her parents, who were up from Puerto Rico. Assorted sisters, brother's in-law...you get the idea, a houseful.

When it came time for Wendy to open a gift from me, I handed her a small wrapped box, DVD size. As she began to strip the paper off the disc, she welled up and then began really crying. I gave her the collectors boxed edition of Casablanca, dropped to my knees and brought out the ring. By this time I think all of the women and most of the men were either confused, trying to figure out why a DVD would cause such a reaction or they were crying too. My sister and mother were in on the surprise, so they had a tearful head start.

She said yes, we married November 4, the following year and Casablanca now and forever has a special place in our memories and our hearts. I don't know if we'll get 66 years; but as Christmas draws near, I just want Wendy to know that she'll always be Ingrid Bergman to me and I hope to be her forever Bogey.

Here's looking at you kid!

Email ThisBlogThis!Share to TwitterShare to FacebookShare to Pinterest
Labels: Wayne