HOW THINGS TASTE... TO ME

While having drinks at Il Bistro with our new pal Rick the bartender, I had some observations, make that rum soaked revelations, on how things taste.

Wayne ordered some very high-end single-malt scotch. I was undecided so I said make it two. I know I don’t like scotch but apparently I find the good stuff particularly offensive. This $13 glass of hooch tasted more like hind end than high-end to this girl.

“Do they filter this through a pig’s ass that has been rolling in the mud?” I mused.

But Wayne loved it. He conversed with Rick on how long it was aged in peat smoked barrels, and how it reminded him of another dirt flavored spirit he previously enjoyed at The Rose & Crown Pub in Epcot. (Dirt flavored may be more my words than his; I can’t remember.)

So I drank some water and ordered a rum and diet.

The water: The water here in Seattle tastes great to me; unfiltered right out of the tap. Keep in mind I most recently come from a small town in central Florida. The town is starting to get big city, last year we got a Wal-Mart, but there is still not a lot going on unless you drive to Orlando or Daytona. Anyway, the water there, and most of Florida as far as I can tell, tastes like sea shells and alligator piss.

The rum and diet: It didn’t taste right so the next round I ordered a Bacardi and diet. Rick said the first one was Barcardi. Note to self… Limes taste better in Florida.

Wayne has a much more sophisticated palate than I. That may be why he is always watching the food network looking for new way to prepare meals. Yeah that’s it; nothing to do with the chefs like Giada De Laurentiis. 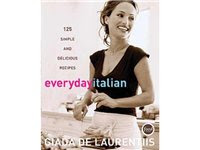 I told him once, “I don’t what you see in that Gelato chick.”

“Her name is Giada, not gelato,” he protested, “but I bet she is kind of velvety on the tongue.”

Giada is way better than Paula Deen and much cuter to look at. I agree with you about the water. We are from Phoenix and the water is disgusting.

I had never heard of this Giada chicky until I read this. So I checked out the pics and she is hot! Her nose is a little pointy, I think, but I'm pretty sure no man is checking out her nose. I might have to watch this show just so I can critique her the way women are sometimes prone to do when someone threatens us with their beauty. HEHE!! I say that, but I ain't got no cable, WAAAHH!! You hotel dweller with your cable!