Julie Bowen and Her Talking Vagina 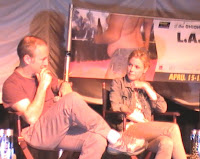 A funny thing or two happened at the L.A. Comedy Shorts Film Festival, held April 15th through the 19th in, you guessed it, L.A. Not the least of which was Julie Bowen talking about her talking vagina. It seems she’s had three kids in two years and her girl parts have a thing or two to say about that. I was laughing too hard to hear all of it, but I think she’s trying to get voice over gigs for her cooch. Break a leg Julie, or something.
And as long as we’re on the subject of girl parts…
I needed certain unmentionables while on our trip, so I popped round the corner from our hotel in Little Tokyo, to a local grocery. Just about everything on the shelves was in Japanese. I don’t know if the staff spoke enough English to understand what I was looking for, because I was not going to ask just in case they didn’t. There was no way I wanted to try and act out the particular ailment I needed some relief from. While not exclusively a girl problem, still somewhat embarrassing to pantomime.
But we had a great time, you just have to remember no matter where you travel, if you’re not sure what it is don’t eat it.
Oh, and one more funny; Larry King walking down Rodeo Drive. It's just his enormous head!