The Twelve Things of Christmas

So went our Christmas in Ohio.
But I ain’t mad…

Last August it was hot here in Central Florida, and humid and sunny and I was sick of it. Yes it is nice never having to wear socks, but I do get a little tired of having to put on sunscreen just to take the trash out. So I booked a lake side cabin at a park with a big woodsy lodge, in Ohio. I wanted a white Christmas complete with hot cocoa, fire side sing alongs and the ghost of Bing Crosby. In fact, I somewhat resemble Rosemary Clooney…the later years!


Two weeks before the trip, the lodge called me. There would be no Christmas decorations in the park and the bar at the lodge would be closed. They had booked a group of three hundred and fifty Muslims for the entire Christmas week. I can’t blame them, if you have almost every room in your joint booked by a certain group, you accommodate that group, it just good business. But it did kind of squelch my dreams of ski laden holiday revelers, shaking off the snow around a crackling fire while the staff kept the hot toddies flowing and my family, plied by alcohol and the spirit of Christmas, would forgive each other their faults and get along like the Waltons on Prozac.

I guess you know that didn’t happen.

If you want to know what a turd in a punch bowl feels like, stroll through the large lobby/ sitting area of a lodge with 350 Muslims, sporting your favorite Santa hat with the leopard fur band, just in time for the three o’clock check in.

No matter, the park promised to have a cabin decorated with a tree and all the trimmings when we arrived. We picked up a key and headed for the cabin. Funny how 30 degrees and snowing would have been a Christmas miracle, while 40 degrees and raining cold little daggers was so not fun.

Unload $250 worth of groceries, luggage, wet dog, a 20 pound turkey, put on dry clothes start a fire and have a look around. Something is missing. Uhm, I know something is wrong, but I just can’t put my finger on it. Where’s the freakin tree?

Well they offered to get us the key to the cabin with the decorations that we were supposed to have been given, but I was not going through all that again, especially in the rain and near dark. Hell, it takes one guy just to keep the dog out of the turkey and ham. Turn your back for one minute and your eating what's left of a dog slobber basted bird for Christmas dinner.

Anyway, the park comped a night to make up for it. And really, by the time we got 13 family members in that cabin, we would have had to shove the tree up somebody ass and called them an angle just to make room. So it all worked out. 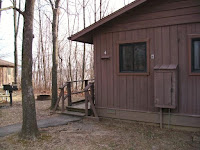 When all was said and done it was a very traditional family Christmas. Some of us got quietly drunk, some quietly sulked, some ceaselessly complained, and Wayne filmed the whole thing so that he might show it to me every time I wax sentimental for Ohio, white Christmases and family gatherings.

Not everybody had a bad time though; the dog got the turkey gizzards and was happier than the year I got a boom box and a copy of Michael Jackson’s “Off The Wall” on cassette. And while the trip wasn’t what I dreamed off, it wasn’t as bad as I expected, after all they’re my family and I love them all... most of the time.