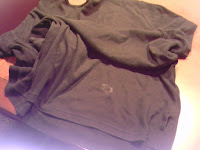 That’s one of my comfy black tee shirts. I used to wear a lot. Prolly not gonna wear it so much anymore.

Well, what’s that white spot on the back of it?

Oh that? That’s just flippin frog slime, from when the little stalker was trapped between my butt and the seat of the truck. 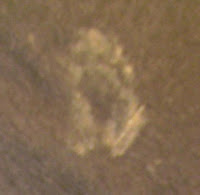 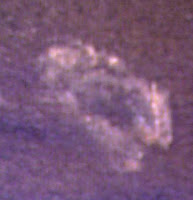 Yeah, seems the relentless little nightgown boob jumper hitched a ride on my ass when I got in the truck last week. Apparently I am no princess, cause if I could go all the way to Publix with a frog wiggling away between my right cheek and the bucket seat, I am pretty sure I could sleep on a pea, ear of corn, keg of beer and not notice it.

He was driving to work at 5 am when he noticed something out of the corner of his eye. Then a strange slapping noise as the anthropomorphic amphibian looked for water in the cab of the truck. Wayne doesn’t think these frogs are out to get us, like I do, but he was concerned about the little leaper taking a lucky hop into his coffee.

Wayne says he tossed the frog out the window at the next light, but he could have left reinforcements behind.
So, when I got out of the car at the store, I notice something out of the corner of my eye… and heard the twapt. I saw him head for the back seat but Wayne couldn’t find him so I was forced to ride home with my tee shirt over my head. I couldn’t live if one of them got in my hair and I think they know it.

It wasn’t till we got home and I pulled off my shirt that I noticed the tell tale goo. (Insert huge shudder here)

We are in Seattle for a temporary assignment, and I haven’t seen any frogs. Pretty sure none of them caught a ride in the luggage although it would not have surprised me. I don’t know what the critter situation is like here but from what I have seen so far it would have to be something that can live without the sun.