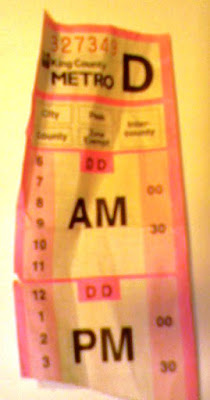 I rode the bus today, and it was a long bus and I did it all by myself.

It had been about 20 years since I last rode the bus, and that was in Columbus Ohio, in the winter, in the dark, I missed my transfer to the last bus of the day and it SUCKED.

“As God is my witness I will never ride the bus again!” I proclaimed while standing ass deep in melty wet snow waiting for my sister to pick me up, when she got damn well ready to pick me up. But how could I know that one day I would be in Seattle for 3 months with no car and my choices would be one more day in the hotel or take the freaking bus somewhere, anywhere.

So I did my research, collected route pamphlets, cross checked with the King County online trip planner, had the hotel shuttle take me to the bus stop and ventured on board.

20 years later or no, I guessed the rules couldn’t have changed that much; keep your head down, your hands within your own seat area and avoid the guy who is talking to himself. Oh, and if you know what’s good for you, you better have correct change or you will get booed like Bush at a lesbian rally. (That’s George W. of course.)

One more thing; these days, correct change means breaking a five before you get on the bus not breaking a one like when I was a regular rider.

All went well on my adventure, save for garlic man in front of me. Wow he was an olfactory offence I won’t soon forget. But even his super stench couldn’t take away the awe of coming up over a hill and seeing MT Rainer in the distance. Most days have been cloudy, our hotel is in a valley and I haven’t got to see it that much. It’s just surprising to be riding along behind stink man, watching a Wal-Mart roll by the window and then suddenly you look out the other window and there is MT Rainer’s snowy top jutting up into the sky.

It seems like when you see something as beautiful as that you ought to be in a better place than on a bus. I mean there should not even be a Wal-Mart anywhere that you can see it and something so majestic at the same time. I don’t know… when we first moved to Florida, I couldn’t believe there were palm trees outside of a Wal-Mart, I guess you get used to it, but I can’t imagine getting passé about seeing that mountain while hauling TP and canned goods out of the store.

It didn’t take long to get to my destination, but I had earned myself a little treat. I purchased post cards, found a little spot and proceeded to fill them out while enjoying a little Jack and diet. Yummy. Did you know that drinking Jack while you’re writing makes you just as chatty as when you’re talking? I had to send one person two postcards just so I could finish my thought.

For my next trip, I am planning on going downtown. I am such the explorer! If Dora drank Jack, we’d be twins.