Twilight Scene Contest, but Not

For months I have viciously mocked and ridiculed all things Twilight. Boy vampires and heavy breathing virgins begging to be turned; PA LEEZE. Been there done that. My girlfriend 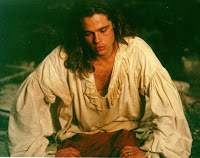 s and I saw Interview the Vampire so many times I named my cat Louis, so I could pretend he was Brad Pitt when I was petting him. But recently I broke down and had Netflix send me Twilight, rationalizing that viewing it would give me fodder for my venomous diatribe against woman over the age of 21 lining up to see what surely must be saccharine tripe.

I guess the ”vegetarian" vampire boys were kind of cute; but cute like you might think, "Oh, wouldn't he just look adorable in a suit," or "Isn't that sweet how he pouts like hungry puppy?" Not pulse raising hot like thinking about Wolverine rubbing his mutton chops all over me... well not me, I am happily married to my own super hero, but thi

nking about watching Wolverine rub anything might make you have to take an extra blood pressure pill.

However, the main vamp, Ed, did manage a five o’clock shadow and bushy forearms,

but just because he had been 17 for a hundred years doesn't make you a man. Call me old fashioned, but somewhere past the age of twenty-two I started liking my men looking like men. (This was just past my huge Prince phase)

Basically I found the first half of the movie to be pretty slow and predictable. The second half got better and it was full of beautiful scenery, even if I am not a fan of the handheld camera stuff. So, I have to admit I didn’t totally hate it, just mostly, and here’s one reason why. The Accidental Touch Scene. BARF. BARF Twice!!!

You know the accidental touch scene; the two star-crossed but hesitant lovers who have to yet to consummate their feelings with so much as a handshake, “accidentally” brush finger tips, knuckles, knees or heads in some adorably fetching manner that is supposed to make you tingle in the area that the characters are leading up to touching each other in.

The Accidental Touch is also used to bring characters who “hate” each other into the basking warmth of desire, culminating in hot monkey lovin'. Again, PA LEEZE.

Wayne and I had a little bet on when the Accidental Touch would happen in Twilight, and thanks to the slow first half I lost the bet and have to “accidentally touch” Wayne for the next three Saturday nights. (I don’t really mind, maybe I can even get him to bite me. You know, on the neck, like a vampire. What did you think I meant?)

We were even thinking of hosting a scene writing contest, but I don’t how to do that. I would truly love to read what people came up with though, so if you want to share your “Accidental Touch” scene, please do.

Write one to three pages of the most original over used plot devise in movies, the "accidental touch". Try to find some way for your characters to make contact in a way that has not been done before, or that is especially gross or amusing. The “worst” one wins nothing as this is not a real contest but you will get kudos from us. An example of an original, gross , and amusing scene: Two guys are standing at a urinal, and for some reason, a commotion, loud noise, whatever, they accidentally quickly turn towards each other and touch… you know, tingly areas.

Post your scene in the comments or email us at lemontreechronicles@gmail.com