It was once said of Rembrandt, “He can blend like no one else, reality with mystery, the bestial with the divine, the most subtle and powerful craftsmanship with the greatest, the loneliest depths of feeling that painting has ever expressed”.

Visitors to Capt. Brien’s August 12th and 13th had the opportunity to witness a different kind of master at work, and although his medium is seldom viewed as art, Donnell Rawlings proved that his comedic craftsmanship can move an audience with both a subtle and powerful hand. 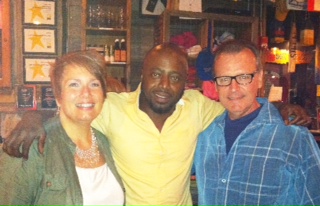 From his opening salvo of profanity laced observations on race, society and technology, to his honest and profound opinions on subjects ranging from the President to homosexuality to relationships; Donnell blended the entire range of his artistic palate to create a portrait detailing his viewpoint of contemporary American life.

Watching him use the entire venue as his stage was refreshing, as so many in stand-up these days prefer to remain behind the microphone and perform to an audience as a whole unit. Donnell makes it personal. Interacting with audience members to enhance, reinforce and strengthen the comedic points he is driving home. His energy seems boundless; his connection to the material is flawless.

Catching my eye at one point, he chose to challenge my lack of laughter for a moment following his graphic illustration of B.i.C. T.I.I.T.F. was just the icing on the cake! (you have to see it!). My apologies to Mr. Rawlings, but it was at this point in the show that my writer’s analytical brain kicked in and I sat in envy of his skillful manipulation of the audience. My internal dialogue was speaking to me, “Damn, this mother-fucker is GOOD"! Funny doesn’t do him justice.

Continuing to spin his comedic web, Donnell wrapped the audience in a silken cocoon of inclusiveness, making us all part of the joke, but never feeling that the fragile strand binding us all together would break and the web unravel. The show came to an end far too soon. Donnell left us all wanting more and that is a very good thing. He may not be the most well-known name in comedy today, but you may rest assured that day is coming soon.

Don’t miss an opportunity to see him in action while you can. Check out the show schedule, buy tickets and take all your friends. Donnell Rawlings may very well be the funniest man in America. And anyone who can't handle that can "Take it in the face"!

Email ThisBlogThis!Share to TwitterShare to FacebookShare to Pinterest
Labels: Wayne

I love it! Ashy Larry is a funny mother sucker!