A SAK of Boobies 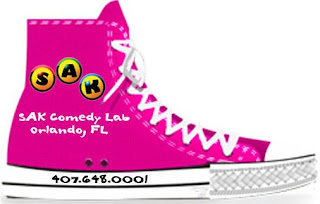 We started improv classes at SAK Comedy Lab  where I have been volunteering.
I started going there just to be around funny people, but found a community too. Creative, talented people who are so accepting and supportive of everyone’s artistic interests, despite a staunch refusal to think that I am as funny as I think I am.
They all talked of and recommended the improv classes offered there, but having seen the shows, I never thought I could do what these improv specialists do. (It generally takes me about three days to come up with a witty retort.) Then my husband, who by the way is only one who almost thinks I am as funny as I think I am but always supports me none the less, suggested we take the class together. I so super love him.
Anywho, so the first class went great; so much fun, and we are lucky enough to have Charles as our instructor. His SAK bio:
Charles Frierman

Charles has the longest hair of any of our improvisers. He's also the only improviser at SAK who moonlights as a librarian.

I had met Charles before. Many a night while sweeping the theater after the show, Charles would come off stage and shake hands and thank each of us volunteering for the night, so I was really happy to find out he would be our instructor.

Last Sunday was our first class. We played improvisational games, some to help learn each other’s names and eventually we even got to get up on stage, just like the big kids, and do some improv. Some were better than others, some of us (me) had a case of the nerves and some really, really impressed me (my husband). But Charles made us all feel safe and encouraged every effort.

I can’t wait for the second class tomorrow night even if I do end up rolling around on the stage again. At Charles’ urging students are to be accepting of each other’s scene suggestions when in an improvisational game, so when my fellow student suggested that our characters roll around on the stage, I hesitated but proclaimed “yes lets” and down I went.

But my boobs went up… and out… the top of my best bra. The one that made my bestie at work reply to my wish to have a boob job with, “You mean a reduction?” Yeah, it’s a really good bra, thank you Army Corps of Engineers. But as luck would have it the unruly orbs never made it out my shirt.

So when I stood, trying to make my lack of grace in rising from an awkward, very public spread eagle position, look funny, I pirouetted my back to the audience of fellow students, gave my foundation garments a couple of quick adjustments, (I also had a wedgie), and sashayed into the wings stage left, boobs and granny panties back in their rightful places.
See you tomorrow night SAK improvisational classes… PS, I will be employing duct tape in preparation for whatever positions I may end up in.