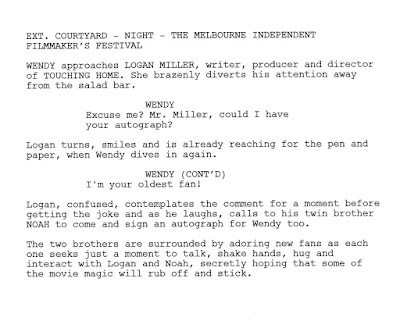 Thus continued a wonderful evening of film and conversation that Wendy and I had Saturday evening at the Melbourne Independent Filmmakers Festival.

The festival, celebrating ten years of showcasing independent film, is unknown to many Central Floridians. That is unfortunate, because the production value of the festival events is top notch and the films presented are representative of the best local and international independent film makers.

The night air was cool and breezy by Central Florida standards, the food and drink were fantastic and we had just finished viewing a film by Logan and Noah Miller that is a sure bet to establish the careers of these twin brothers from Northern California.

The highlight of the festival for Wendy and me was the MIFF VIP Screening and Reception that began with a red carpet arrival for many of the film makers, including the Miller brothers. The evening continued with the Florida premier of Touching Home, the first feature film by Logan and Noah Miller. The brothers wrote, directed, produced and starred in the film which also features four time Academy Award nominee Ed Harris. This was only the third screening of the film, following the San Francisco Film Festival and a showing in Calgary, Alberta.

The film is a heartfelt story of two brothers seeking success as professional baseball players while attempting to reconcile the pain and love they have for their homeless, alcoholic father. The photography was lovely and captured the lighting of Northern California perfectly. Although they have no formal film or acting training, Logan and Noah have accomplished what few in Hollywood are capable of doing. They reached an audience emotionally by way of a simply told story with no special effects, no CGI and a budget smaller than the cost of some homes in Central Florida.

Following the film, we joined the viewing audience outside in a beautiful courtyard setting for the VIP Reception. Logan and Noah Miller eventually found their way to the food tables and that’s when Wendy saw her golden opportunity and the scene played out pretty much as described in the opening of this post.

We talked with both brothers and shared some common screenwriting missteps, conversed briefly about Northern California locale and in general found their enthusiasm for film infective. They were polite and asked for our business cards, (fortunately Wendy had the foresight to bring some!) and they graciously encouraged us to “just do it”! With our screenplay well on its way to completion, this was a great shot in the arm to keep our motivation going.

Wendy and I both agree that this is the best film we’ve seen in 2008. Wherever you are, find a way to see Touching Home. There will be huge buzz on this project and I’m convinced that the two young men we met Saturday night are going to have a long, illustrious career in the movie business.

Hi Wayne - great write up! Nice meeting you in Melbourne...