Yesterday we went down to the Melbourne Independent Filmmakers Festival, more on that later. 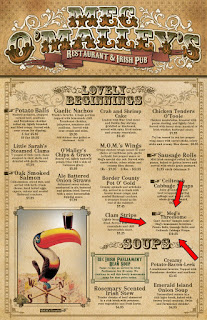 Wayne had the ribs and chips. I really liked the chips. I had the Irish stew. Really good; I just wish it had been a wee bit warmer. The place was packed on this Saturday afternoon but we were seated in about 15 minutes and even got to catch a little of the Buckeye’s game on one of the many TVs around the bar.

Our server Tiffany was great, a nice girl who didn’t let us go to long with out checking on us but never asked how the food was just when I had taken a bite. In all we had a great time at so check it out, it’s in the historic district of downtown Melbourne.