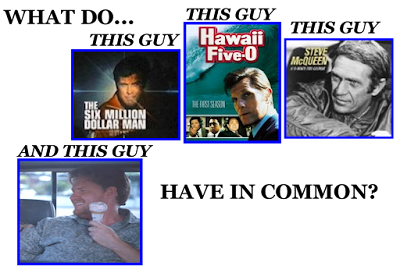 THEY ARE ALL STEVES!
Steve Austin, Steve McGarret, Steve McQueen and Dex

Dex and his buddies practice the Tao of Steve, a guylosophy that involves the three steps to getting laid, getting laid often, and getting away with it. Until dot dot dot, the one you really want comes along and isn’t interested in a Steve.

Donal Logue, who had a short stink on ABC’s The Knights of Prosperity in 2007, plays Dex an unlikely Steve; a fat stoner in his thirties who works part-time and bullshits full time. Yet his mastery of the Tao gives him a mastery over women, most of them anyway. When Dex and his friends go to their ten year college reunion he re-unites, sort of, with Syd, and the Tao goes into a tailspin.

Syd, played by Greer Goodman who is also a co-writer and sister to the director, ain’t buying Steve or Dex’s line. She matches him intellectually and is unimpressed by his usual bag of tricks. In fact Dex is so thrown he misses the mark on all three of the steps to naked nirvana. But the movie doesn’t totally become a chick flick, the romance is cut with humor, interesting dialog, and the characters are real and relatable. (Meaning they’re as fat and ugly as the rest of us.)

The story is based on Duncan North (co-writer) and his life in Santa Fe. It’s a good story and a good movie with a refreshing realistic take on love. So this weekend if you don’t act like you want to see this movie, mention that it was a Sundance Film Festival award winner, then say you are just going to return it and start to walk away, you will have mastered the Tao of seeing the movie you want to see and your mate will think they talked you into it.

I love it! That ending honestly makes me want to get the movie just so I can try the Tao technique! :)