Wanna Get A Movie? 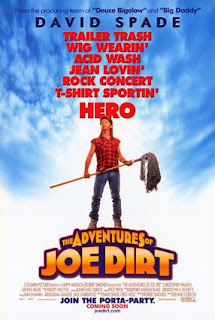 It’s Thursday and that makes it trash day in my neighborhood and Non-new Review Day at Lemon Tree Chronicles (when you just can't find anything else to watch)……and there’s nothing more trashy than this weeks pic.

If you dig David Spade you’ll love him shoveling up the laughs as writer and star of Joe Dirt. (I know, I know, but I couldn’t resist it)

Warning: Watching this movie will do little to improve your friend’s opinion of you. Tell them you watched Little Miss Sunshine this weekend and were very much moved. It was a poignant look at today’s society, a family’s dynamics, and a surprisingly touching performance by Steve Carell. Ok good, now back to the mindless fun.

I liked this movie so much I wanted to be Joe’s sister, and you will too if you just give it a chance or a six pack. Save for rueful moments when the movie reminds you of your last family reunion, you will, if nothing else, come away feeling pretty good about your own life, no matter how crappy it is. Joe Dirt makes redneck, inbred, unemployed, white trash, trailer-park rejects, look like a step up from his gene pool and current residence; if you count a janitor’s closet as a residence.
Abandoned as a child our hero makes his way through myriad obstacles accompanied by the finest in classic rock tunes. Seriously, the soundtrack of this movie is a one right after the other time warp back to when rock was rock. TURN IT UP! Along the way he encounters a plethora of social outcasts and rejects who help him on his quest to find his family, his home, and his love.
It’s complete with a requisite bad guy adequately portrayed by Kid Rock. But I use the term portrayed loosely, as I doubt Kid Rock did little more than show up in clothes from his youth and his own car to convincingly interpret the troglodyte pubescent antagonist, Robby. Def Leppard does not suck, Mr. Rock! And of course the beautiful love interest, Brandy, played by Brittany Daniel…she is ok if you like blonde, skinny, built girls who deep down inside, despite their own beauty, see beyond other people’s outer flaws and accept them for who they are because she has a heart of gold and is also an animal lover. I mean if you like that type whatever, she didn’t do much for me.
On a more serious note; about mid way through the film there is introspection on the male/female mating ritual in rural America. Exquisite cinematography, with the finest use of slow motion seen in recent weeks, Joe Dirt’s bravado and animal magnetism peak as a carnie worker who takes carnal knowledge of a small town’s not so nice girl.

Ok so who else is in it:
Christopher Walken as Clem the mobster mentor to Joe. Walken is his usual quirky character and does not disappoint. If only I were a broom so he would dance with me.
Adam Beach (currently of Law and Order) is Kicking Wing, a road side fireworks entrepreneur who befriends Joe and learns a little something about marketing.
Jamie Pressly, (currently plays Joy on the NBC show My Name is Earl), in a Joy Jr. type roll. As Joe’s sister she is, well, Joy basically. But she plays the country hick thing to perfection.
Dennis Miller as Dennis Miller being Dennis Miller, so if you like Dennis Miller ok, if he works a nerve, he is not on screen very much, so ok.
You can also look for Rosanna Arquette, (or close you eyes like I did), a bit part with Chris Farley’s brother, and Carline Aaron and Fred Ward who played Joe’s parents round out the cast.
So get a cold one and some space peanuts, cuddle up next to your dog, (remember you don’t want your friends to know you watched this movie) and enjoy. Oh, go ahead you know you want to. DANG