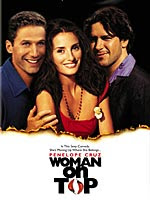 It’s time for Thursday’s non-new review and this week I am on top of the world, if not any women; and hopefully Wayne is just kidding when he says he would like to see that.


In this story of love, motion sickness and the art of cooking, there is something for everyone. For the guys: Isabella, enchantingly portrayed by Penelope Cruz, is gorgeous, comical, and has a sexy Brazilian accent. You’ll be running out for chilies after watching her cook. For the girls: Murilo Benicio as Toninho is Isabella’s husband, for now. He is so SEXY and not necessarily the man you may think he is at first. His songs could woo the deaf, his looks could attract the blind and his sex appeal could make a guy change teams. Which bring us to Monica (Harold Perrineau, Jr) who is for everyone in between. Monica, Isabella’s best friend, is beautiful and handsome and quirky and loveable, so much so she gives Cliff the hiccups. Cliff (Mark Feuerstein) is for you Wonder Bread lovers, but is also adorably charming as the nice guy rival for Isabella’s love.
This movie is exquisitely filmed with bright colors, exotic locations and attractive people. It takes you from beaches in the northeast of Brazil to
Lombard Street in San Francisco. The music and song throughout the film give a feeling of love and happiness while the ritual sacrifices to the sea god Yemanja are foreboding. Dabbling with curses and sacrifices to sea gods can have some unforeseen and ultimately unwanted effects.
The story focus on Isabella and how her vertigo threatens her husband’s manhood putting their love, which is hotter than a habanera pepper, in jeopardy. Stifled from taking the lead in the traditional male role regarding inconsequential matters, Isabella’s husband acts out his need to be the man by committing a grave betrayal.

What I love about this movie is its subtleness; nothing is decided for you. Characters are flawed yet still beautiful and engaging; there is no obvious villain. There are very funny parts but there is no rim shot slap stick. And everything is at an easy languid pace, but don’t mistake that for dull. Despite, or more likely because of, the lack of American block buster punch or Indi film righteousness, you’ll be smitten with this film.